Click HERE to view standings in a separate page 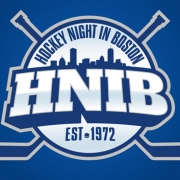 Download the HNIB app on iTunes store or Google Play by searching “HNIB” and looking for this logo. View rosters, scores, standings, and stats from your phone or tablet!

We welcome you to the 2019 Northern New England and Massachusetts North High School Festival. This year, the two events will feature an interlocking schedule that will include crossover games between the two Festivals.

NCAA rules, along with coincidental penalty washout (5-on-5).  Penalized players will serve time; substitutions from bench will play.  Automatic Icing, allow line changes at all stoppages of play. Mouthguards/full shields are mandatory.

Three 20-minute periods. Goalies will all play one period in each game. Ice will be cut midway through the second period. No overtime (except for championship game if needed)

Each team will get four games over the course of the weekend. Players will be evaluated by coaches on the bench and staff watching off-ice. Coaching staffs will meet following action on Sunday to select players to move on to the 45th Annual HNIB Boys Major Showcase, which will be held July 24-28, and to select a Northern New England Sophomore team which will play in the HNIB Sophomore All Star Tournament July 7-11.

Although locker rooms will be locked during games, we advise you to leave money and valuables in your car or with parent/guardian, rather than bringing them into the locker room.  HNIB will not be responsible for any items left in the locker rooms.

The HNIB coaches and staff look forward to a week of exciting and competitive hockey.

Maps were disabled by the visitor on this site. Click to open the map in a new window.
Scroll to top